A Coalition, led by the Oregon Cascades West Council of Governments (OCWCOG), including  the Cities of Newport, Toledo; the Confederated Tribes of Siletz Indians, and Lincoln County, has been awarded a U.S. Environmental Protection Agency (EPA) Brownfields Community-Wide Assessment Grant. (A brownfield is a property that is not being used to its full potential because of known or suspected environmental pollution.) The grant is intended to support brownfield redevelopment in developed areas within the Yaquina River watershed: the Cities of Newport and Toledo, and the areas of Lincoln County located near the Yaquina River between the cities.

A Coalition of partners will represent the interests of their jurisdictions and assist with community outreach and public involvement throughout the grant period. A Brownfields Advisory Committee garners input from local stakeholders and community representatives. The Coalition was granted a 1 year extension and another 6 month extension and the grant concludes at the end of March 2022. The goal of the final months is to complete work including Phase 2 Environmental Site Assessments for existing projects. 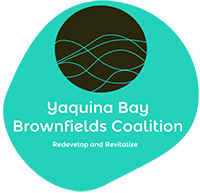